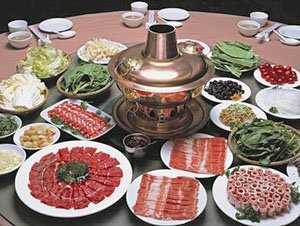 Samovar Russian invention justly considered, but similar in design of the device, invented independently, can be found in some other cultures. Perhaps the most notable of these is the Chinese samovar - Hogoev. With his Russian samovar in common heating pipe, located in the center tank. Hogoev also used to heat water that is poured into the pot, but the similarities end and differences begin. Brought to boil water is used not for making tea and cooking. With the pot lid is removed, after which the meal participants immersed in water is very thinly sliced ​​pieces of lamb, using chopsticks. The process of cooking meat this way takes a few seconds, and each of the participants in the meal has the ability to control the degree of provarki meat to suit your taste. The meat is then eaten with various sauces. There Hogoev model in which the internal volume of the pot is divided into two compartments. One compartment is used for cooking meat, and the second for cooking side dishes, such as vegetables. As for the origin Hogoev, it is believed that his predecessors were born in the damp climate of northern regions of China where boatmen (fishermen) felt the need to maintain your health food hot during operation. It happened in the XVI century, and after a long evolution Hogoev acquired a modern look. Today Hogoev widely used in Chinese establishments catering to the traditional cuisine and is used for cooking various dishes. Technically Hogoev close to the samovar, but a fundamental difference of tasks performed by these devices in the national culinary traditions (tea and cooking) does not allow us to put a sign in between the semantic equality.