What is a samovar?

Samovar is not just part of the past gastronomic traditions, it has become a cultural phenomenon in our country. Sung by literary classics, shown in the best paintings of artists - he entered the genome of the Russian people.

In many families, the memory of joint tea drinking with the older generation and their old samovars is still alive. Some lucky ones keep family heirlooms still. This part of our shared history is warmed by the warmth of living memories of people close to us and objects dear to them.

The meaning of the word "samovar", despite its considerable age, is still clear to everyone. It reflects the functionality of the product - "he cooks".

It is also shown in dialect versions. Yaroslavl residents called him "samogar" ("he burns himself"), the Vyatichi "samogrey" ("he heats himself"), the Kurchans - "samokipets" ("himself boils"). And even in the Tatar language, it was called “snare”, that is, “teapot”. By the way, some researchers believe that it is from this word that the Russian “samovar” has its etymology.

The history of samovars

Many of us perceive this object as the invention of the masters of our country. Alas, it is not.

The emergence of devices for boiling water

Documents show that for the first time products that combined water and coal tanks with a discharge pipe appeared in China. Called "hogo", they spread to the territory of Japan and modern Iran. And the first relic that reached archeologists was 3600 years old and was found in the countryside of Azerbaijan. 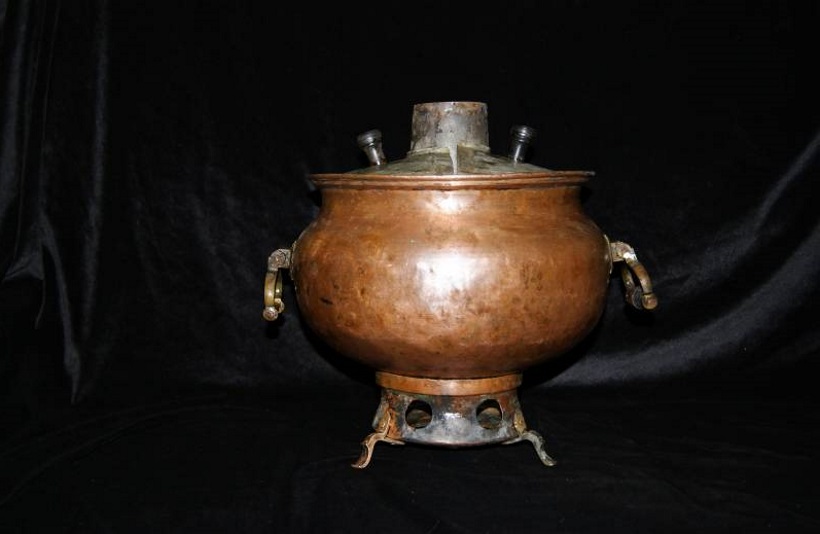 Autepsa (“self + boiling”, “self + brewing”) was the name of the vessel in which the ancient Romans warmed the water. Like most things of that period, he was not devoid of grace. High twisted legs, bellied bowl in the form of a pumpkin, rich decor - they could decorate the table of the famous citizen. But the use was not as convenient as the Russian invention - he did not have a tap! Inside there were two compartments - in one they loaded burning coals, in the other water. Scoop it had scoops. But there was another “option” - in the summer, instead of coal, the tank was filled with ice and drank chilled drinks.

A legend is spread that the samovar was brought to Russia by Peter I, but the documents say that it appeared half a century after the death of the last Russian tsar. Production began after the Tula industrialist Demidov went to the Urals, where, with local blacksmiths, he forged the first self-heating structure. Later, she was found among Demidov property. Years later, the Suksun samovar plant and the Suksun form will appear here - in the form of an antique amphora.

77 years after the first experiments of Demidov, the Lisitsyn brothers opened the first stream production in Tula, therefore Tula is considered the birthplace of Russian samovars.

Factories of famous merchants in Tula

Looking at their path, many tulas repeat the success of the Lisitsyn. One by one, handicraftsmen grow to the status of manufacturers. Many are very skilled engineers and offer their know-how. So, the author is considered:

Initially, thin sheets of red and green copper were used for production, and cupronickel was used. But these were expensive materials, so artisans switched to brass. They sold products by weight: the more, the more expensive. The main sales channel for the Tula artisan dynasties were fairs: Nizhny Novgorod and Makarievskaya.

The appearance of samovars on liquid fuel

Becoming the center of the samovar craft, Tula continued the orientation on discoveries and improvements. Thus, in 1807, the factory line of Reingold Theil released an innovation with a tank for kerosene. She immediately went abroad and widely sold in the Russian regions, where this type of fuel remained cheap, for example, in the Caucasus.

After the revolution, private factory lines were closed. Almost 2 years the industry has not developed. Only in 1919, the new leadership of the country formed a state union of samovar factories. True, this did not lead to an immediate breakthrough. After 3 years, the first Soviet samovar was published at the nationalized copper-processing state plant in Kolchugino, but the industry has not gained pre-revolutionary success.

15 years later, as a result of division of production, the Tula plant “Stamp” appeared. In the period after the Second World War it remains the last samovar line in the country. Since 1959, electric models have appeared in its assortment, and since 1964, the Yasnaya Polyana souvenir series has been launched. The fire models began to leave the horizon due to the equipping of new buildings with cooking stoves.

Over the past 20 years, interest in samovar themes began to revive anew. In Tula, the history museum "Tula samovar" was created, in Kasimov there is a permanent exhibition dedicated to the Russian craft traditions of samovar craftsmen. Antique collections of private collectors of old Mikhail Borschev and Nikolai Polyakov are located in the Shchekinsky district of the Tula region and Gorodets of Nizhny Novgorod.

Since 2005 - already 13 years - the site where the samovar industry is operating again has been operating at the Tula Cartridge Plant. And, of course, Tula is still rich in private craftsmen, who keep the dynastic secrets and subtleties of the old Russian craft.

Features of the production of the first samovars in Russia

Judging by the documents, the first samples were hollowed out of a copper cube. But rather quickly, this barbaric technology was improved. They began by cutting sheets of copper and assembling them from them, as if from a fabric. Not all copper could go to the jar.

The masters had a trick: the sheet was scratched with an awl. The yellow color and scratch continuity said the material was suitable. A discontinuous faded line indicated the presence of copper oxide. In this case, the cut was suitable for the manufacture of braziers or small parts.

Lined by the standards of sheets cut, rolled into a cylinder. The teeth were made around the edges, different parts were fastened with them: they were passed with a hammer, then they were soldered in the forge. Irregularities were grinded, forged again, the structure was calcined and cooled. The process involved 7 highly specialized craftsmen.

Each of the masters worked at home. Within the factory line, only precast operations were carried out. Once a week, a worker traveled around yards, assembled parts and drove them to the assembler.

There are several of them. The main ones suggest the following division.

Despite the difference of the described types, their design consists of approximately the same elements.

Samovars in culture and art

Being a colorful element of the urban and rural life of the 19th and 20th centuries, the samovar has repeatedly appeared in works of art. Sometimes as the main character. Who does not remember the famous kustodievskuyu "Kupchikha for tea"?

The same image is embodied in the film "The Marriage of Balzaminov." The tea-drinking scene of the heroines of Lidia Smirnova and Nonna Mordyukova seemed to have disappeared from a series of canvases by Boris Kustodiev. The same thin saucers, bright colors, pot-bellied samovar, a table full of goodies. On this subject, the artist wrote not one, but several canvases, so much did she take it. And not just him: Petrov-Vodkin, Korovin, Mayevsky painted scenes from the life where the samovar asked for a reason to communicate.

Respect this utensil taught from childhood. In the books of Chukovsky, the samovar is wise, good-natured and authoritative (“Fedorino grief”), taking on the role of Harms (“Ivan Ivanovich Samovar”). He is not forgotten in the literature for adults. Gogol's “Old World Landowners” spend more than one pleasant moment at his boiling sides. Leonid Andreev in the famous essay “Moscow. Little things in life "personifies the identity of Russia in the image of a samovar.

The attitude of the Russian person to the samovar figuratively expressed the oral folklore. For example, sayings - “Where there is a samovar tea, there is paradise under the spruce tree”, “The conversation with the samovar-buyan is more important, and life is more fun”. Not differing in wealth, the common man found for himself spiritual joys in the neighbour's tea parties. The warmth of communication was combined with the heat from the samovar and created a feeling of fullness of life.

The most interesting thing is that this image is so entrenched in the minds of Russians that even today some of us revive the traditions of family tea drinking with a samovar. And others create modern idiomatic expressions with a subject that goes from everyday life to the status of vintage.

The phrases “I and my Masha are at the samovar”, “Put a samovar on a grandfather, we will listen to Manowar”, went to the people relatively recently. And this is a phenomenon that has no analogues in the cultural life of the country. He speaks of the readiness of the younger generation to integrate generally accepted traditions into modern experience.

This testifies to many things - it is early to write off the samovar from the accounts and send it to the category of rare books. He is still with us: both as part of culture and as part of life.