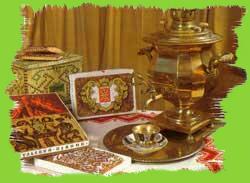 The museum " the Tula samovars " , branch of Museum Association " Tula regional historical-architectural and literary museum " was open in 1990 on Mendeleevskaia street, 8 in the house that was built in 1910 – 1911 per design of architect V.N.Sirotkin.The basis of an exposition of a museum was made with the collection of samovars collected in various years in association "TOIALM". The exposition of a museum which consists of three halls, acquaints visitors with history of begining and development of one of the most known Tula crafts – Samovar making. The first hall tells about Samovar manufacturing in Tula in XVIII - XIX centuries. Among unique samples of the end of XVIII century - "sbitennik" which was the predecessor of a samovar, a pot for preparation of sbiten - a drink made from different types of grass, spices, honey.

Sbitennik was made by first Tula samovar workshop of Lisitsyns. Samovars of first half of the XIX century presented by samples of Somovs factory, Malikovs facotry, etc. At those times samovars mostly were made in the form of a keg, a decorative vase, a crater. There were the coffee pots samovars, portable samovars for travel; “zharovoi” with kerosene furnace; samovars "Parichko" with a removable jug. Since second half of the XIX century Tula becomes the largest supplier of samovars. The Tula samovars have penetrated into all corners of Russia and outside of Russia as well. Tula samovars were presented at every All-Russia and international exhibition. In an exposition of a museum there are the medals received by N.Batashevyms at the World's fairs in Paris (1889), Chicago (1893), London (1909), at the All-Russia exhibitions in Moscow (1882), Nizhni Novgorod (1896). The second hall is presented by samovars manufactured in Tula in second half XIX – beginning of XX century. It exhibits the products of “The Association of Steam samovars factories of successors of V.S.Batashev in Tula " - one of the largest and famous Tula’s factories of XX century. Exposition contains memorial items of members of the Batashev family: portrait of A.S.Batashev - one of brothers of the Batashev family. Among the most unique products of factory are 5 tiny samovars presented in 1909 from Batashevs to the children of Russian Emperor Nikolay II.

Samovars of the Soviet period between 1920 and 1940 presented by interesting samples: a vase " the Turkish hookah ", a samovar-vase gift to S.I.Sepanov, director of the Tula ammuntion factory in 1930th; also samovar presented as a gift to Stalin in 1949 for his 70th year anniversary. The exposition of the third hall acquaints visitors with products of a machine-building factory "Stamp" carrying name of B.L.Vannikov, the only factory in Tula making samovars now days. There are samples of “zharovoi” samovar(with wood or coal furnace), electric combined samovar, and also samovars with the art painting and decorations manufactured in different year.

The mode of work and contacts of the Museum of Samovars